The Purpose of Life

I woke up this morning with thoughts of how my day would play out today. The things on my to-do list that need to be checked off before moving on to other bigger & better things.

I also woke up in state of concern as the most amazing thing happened to me last night. I was in my backyard with my dog Chelsea hooking up the water hose to the sprinkler to irrigate my lawn. As I walked past my deck, I heard a little chirp and what at the time I thought was a mouse scooting across to find a secure hiding spot. I walked over in the direction it was traveling only to find that it was a baby finch that couldn't fly. 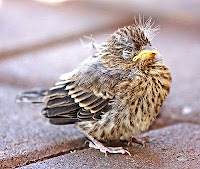 After a few minutes of pursuing it, we each found ourselves in game of "cat & mouse" as this little guy repeatedly escaped capture. Finally, success as I gently tossed my shirt over it and picked it up.

As I put this baby finch in an old birdcage I had laying around, I felt bad, confused but yet relieved. Bad & confused because I didn't know if it became separated from it's nest and/or mother or where it came from. However, I was also relieved knowing that it was safe and out of harms way. God knows what might happen to this poor creature. Since it can't fly nor fend for itself, I now have been granted the responsibility to do the right thing and care for it.

I know this baby finch was in a state of panic, stress and afraid. But once it was in the cage and had time to settle down in it's new surroundings, I could see that it became more comfortable - closing it's eyes, puffing itself up which is a sign on contentment.

I guess the moral behind this whole thing relates to the feeling of being uncomfortable until you get comfortable. Many times in our lives we often find ourselves in situations where we get out of our comfort zone. We start over-thinking the situation, making more of it than we should, we panic and think the worst. After a bit, things may start settling down and we start realizing that things aren't too bad after all. We learn to adapt, grow, learn and take the proper channels to take our lives to the next level so that if we face other uncomfortable situations of life, we know how to best handle them accordingly. Regardless of any situation, consider this - no matter if it's good or bad, we will ALWAYS have a moment of clarity which provides us with the ability to prosper, the potential to gain wisdom and the capacity to elevate our sense of integrity. 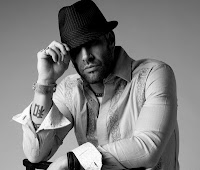 This morning I logged on to my Facebook account and read a quick story that my friend and colleague Brian Grasso, founder of FTR Nation, posted - which happens to be today's guest blog. After reading his story, I was inspired and able to relate everything he said to my story above.

Oh.....and for the record, the baby finch was doing fine this morning as I was hoping it would be. And it sure did look comfy too! :)

Thank you Brian for sharing your insights and one of your many personal stories which we can all learn from.

I first learned to box when I was about 4 years old.

My grandfather would take me out to the backyard and show me how to stand properly.

How to guard my jaw and throw a punch while fading my head out of the midline.

I started taking it more seriously at the age of 12.

That’s when I first laced up gloves and got into an actual ring with an actual opponent.

The purpose of life, my grandfather would tell me, was to step outside what’s comfortable.

Put yourself in places of unrest until they became relaxed, second-nature and simple.

The purpose of life, he would say, was about learning how to become fearless by never letting your doubts dictate what you believe you can or cannot do.

The first straight right that landed flush on my nose brought tears to my eyes.

But not just because the nose is particularly sensitive… Because I was crying.

When you get hit for the very first time, it stuns you emotionally.

And it’s not even about how hard the shot was. It’s about the bad intentions that were behind it.

Someone, in this case another 12 year old kid, was trying to hurt me.

There was ferocity in his eyes and mal-intent in his actions. He wanted to harm me. Cause pain in the hopes that I would either fall, give up or require being rescued by a white towel being thrown into the ring from someone my corner.

The thing is, it didn’t hurt as much as it emotionally bewildered me.

I wanted to run. Seek comfort and security. Find a happy, quiet place that was familiar and just sink into it.

But with my grandfather watching, I pressed on. Uncomfortable as it felt, the purpose of life, so I kept reminding myself, was about being uncomfortable from time-to-time.

You know what’s interesting? After a few weeks, it stopped bothering me to get hit.

I’m not sure you ever really enjoy it, but after the initial shock of it wears away (and that doesn’t take very long) it kinda becomes second-nature. No big deal, really.

This story just got me thinking about how many people sit on their dreams.

Store their true life passions away because they’re too afraid to try.

Too timid to fail.

Too scared to get started.

Because it feels uncomfortable.

But here’s the thing… Starting now, is like a catalyst.

Once you just get moving, you’ll begin to get used to the ‘shots’ of being uncomfortable. And after a while, it will become no big deal, really.

The secret isn’t in trying to create security before you start.

It’s about taking the first shot.

After all, the purpose of life should make you uncomfortable from time-to-time…
__________